We focus more and more on the importance of both physical and mental health as we age, with everything from exercise and meditation to proper nutrition being recommended across the board. As healthy as these considerations are though, there are other things we probably don’t focus enough on –– such as how to keep mental acuities sharp and honed while we get older. 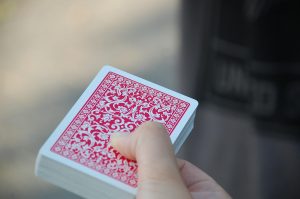 The benefits of taking quick breaks to reset and refocus the mind are widely known, with the word game phenomenon Wordle a helpful tool. This simple little game can serve as a distraction that lifts the mood and refreshes creativity (or at least that’s our experience!). But even beyond this sort of in-the-moment benefit, it’s worth considering the broader power of games with regard to notion of keeping the mind sharp, and even exercising the brain, in a sense. Indeed, studies have shown that playing some more in-depth games can help to slow the decline in cognitive function as we age; options like chess, cards, crosswords, and some board games “keep our brains agile.” Many of these games can be played on your mobile phone, making them more attractive.

With that in mind (pardon the pun), let’s take a look at some of the ways in which these fun, ordinary games can keep us sharp.

The humble crossword may have been overlooked in recent years, falling by the wayside as trendier brainteasers like Sudoku and, yes; online puzzles like Wordle have captured the public’s imagination. But it may be time to revisit these age-old puzzles.

Crosswords are pretty ubiquitous; they’re in major newspapers and on big journalistic websites, there may be a gentle one in your neighborhood newsletter, and compilation books containing hundreds can be found for minimal cost at supermarkets and convenience stores almost everywhere. And if you pick one up, you might just stand to sharpen your mind for the road ahead. Crossword puzzles can help to increase your vocabulary –– and research has shown that learning new words effectively works out your brain, actually increasing your gray matter. In other words, it makes your brain bigger!

Now that pandemic restrictions are easing and vaccine prevalence has made folks more comfortable with in-person get-togethers, bringing out the board games is an option again. And it may do you more good than just offering an opportunity to have some fun and socialize with people close to you.

Research has determined that various factors involved in playing board games also serve as cognitive exercises. We know for instance that the memory formation aspect of playing games “help the brain retain and build cognitive associations well into old age,” for instance, as well as that board games “reduce the risk of cognitive declines” through conditions like dementia and Alzheimer’s. There are not many instances in which these benefits are tied directly to individual games –– but anything from the deductive process in Clue, to the vocabulary exercise of Scrabble (not unlike crosswords), to the strategy in Monopoly can be worth tapping into.

As well as making for a fun evening around a kitchen table with friends, poker can provide a comprehensive mental workout. Players need a good understanding of how to make hands and how those hands rank; situational awareness is key for reading other players and any “tells” they may give away, and the math involved to work out the odds of a successful hand or bet can certainly flex the hippocampus! More than anything else though, poker exercises memory – just as we’ve alluded to some board games doing.

First and foremost, there’s the language of it. As you play more poker, the glossary of poker terms you pick up quickly become quite expansive –– moving beyond basic words like “fold” or “ante” and into things like “angle shooting” (a frowned-upon action that falls short of cheating) or “bluff catcher” (a hand played to call a bluff). Learning and remembering the lingo makes for a natural memory exercise. Even beyond these kinds of fundamental details though, poker is a game that places numerous demands on your recall. To win, you’ll often have to remember how other opponents have played of late, what decisions you’ve made in the past and how they’ve worked out, and even what cards may be left in the deck (as best you can tell) after dealing. All of these processes and strategies help you to exercise your memory.

The ultimate board game in some respects, chess involves an almost infinite array of possible moves and considerations. This leads to the game exercising both sides of the brain –– the left for analytics, logic and problem-solving as different scenarios arise, and the right regarding the creativity needed to find new moves and catch an opponent off guard. On top of these forms of mental exercises meanwhile, chess can also help to hone your focus. None other than legendary grandmaster Bobby Fischer has been quoted as saying that chess “demands total concentration” something many of us practice far too little of these days!

Beyond these direct mental exercises, chess is also (like some other games discussed here) useful in helping us to strengthen social connections as age. It’s a game that can be set up anywhere from a public park (where there are sometimes tables in place already), to a back porch, to a living room –– and even online, in a pitch. But wherever you play, the game gives you a chance to enjoy close interaction with a friend, family member, or even new acquaintance. And it’s well known that maintaining social activity can help to keep the mind agile and benefit cognition.

The benefits of playing games, of course, aren’t limited to just keeping the mind sharp. “Laughter is the best medicine” wouldn’t be such a popular saying if there weren’t a huge grain of truth in it, after all, and above all else, these games will help you to have fun! But as you consider how to preserve your health while you age, it’s worth giving some thought to keeping your mind sharp as well. And games like these can help you in that effort.